While San Jose del Cabo has a historic center with a grand plaza and mission church, Cabo San Lucas has its marina. All roads lead to the marina in Cabo, and the daily parade of boats going into and out of the harbor a testament to the ongoing popularity of sport fishing here.

On a recent trip to Cabo to inspect homes and experience some of the local sites and attractions, we went on a team fishing trip. This was the first time for many of us and we’re excited to share what we learned on our trip! 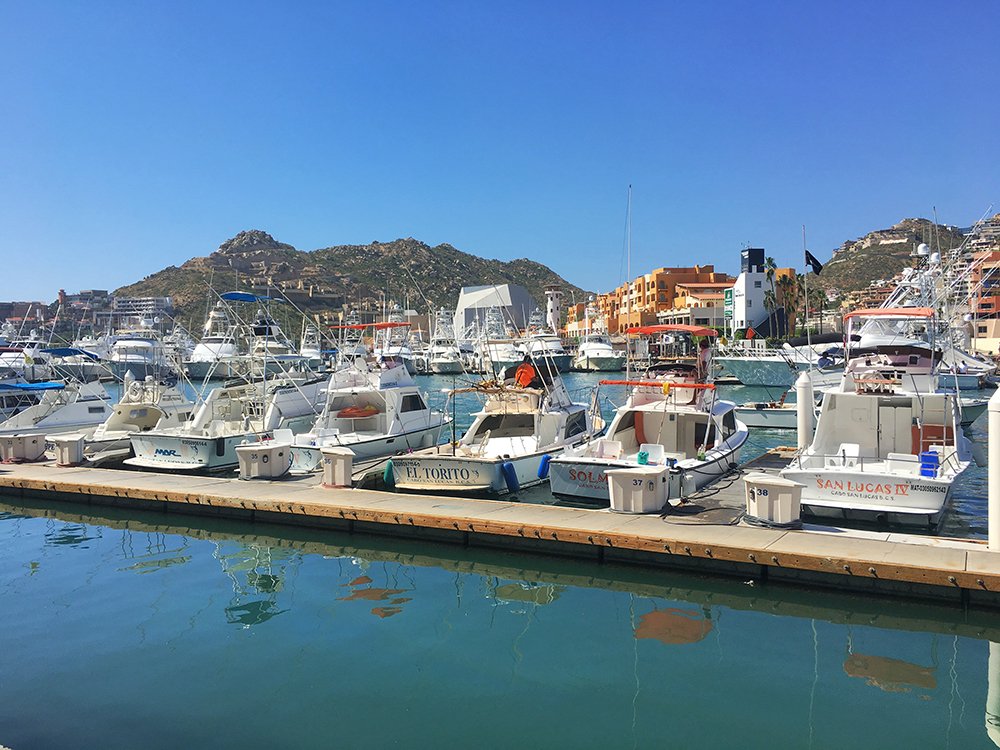 The first thing you need to do is arrange for a boat to take you and your party out for the day. There are many charter companies operating out of Cabo San Lucas. We chose to work with Pisces, which has an established name and large fleet; we rented a 31 ft. boat called the Rebecca. The boats have bathrooms and a table for indoor eating if needed. 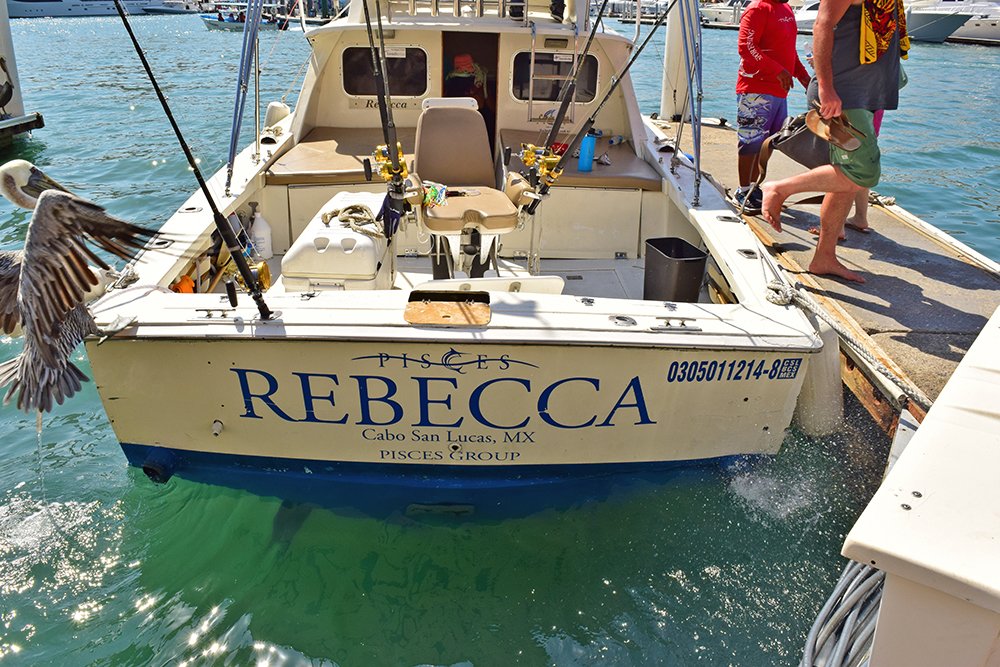 This is where things can get confusing and downright murky. The price of our charter covered up to six people and included a very basic lunch and beverages, including water and cold beer.

There are lots of little extras that come up in the discussion that can make it feel like you’re being nickel and dimed, but we understand that it’s all quite normal. Here’s what we mean.

When you get your price, you will also have to figure in the cost of the following:

Fishing Licenses – the cost per person is $16, with 16% sale tax; minors under 18 do not need a license. This is paid at the dock.

Docking Fee – there’s a docking fee of $100 that you need to pay at the marina.

Tips – the tips for your crew are not included in your fee. You can add an additional 10 – 20% on the cost of the charter.

The day starts early, very early. You are to be at the dock for a 6:30 a.m. departure, where you will pay for your fishing licenses and be introduced to your crew.

They have coffee and some snacks available for the anglers for free, so you can fuel up before you board your boat. There was also a vendor selling breakfast items outside of the dock area, which looked and smelled pretty good! 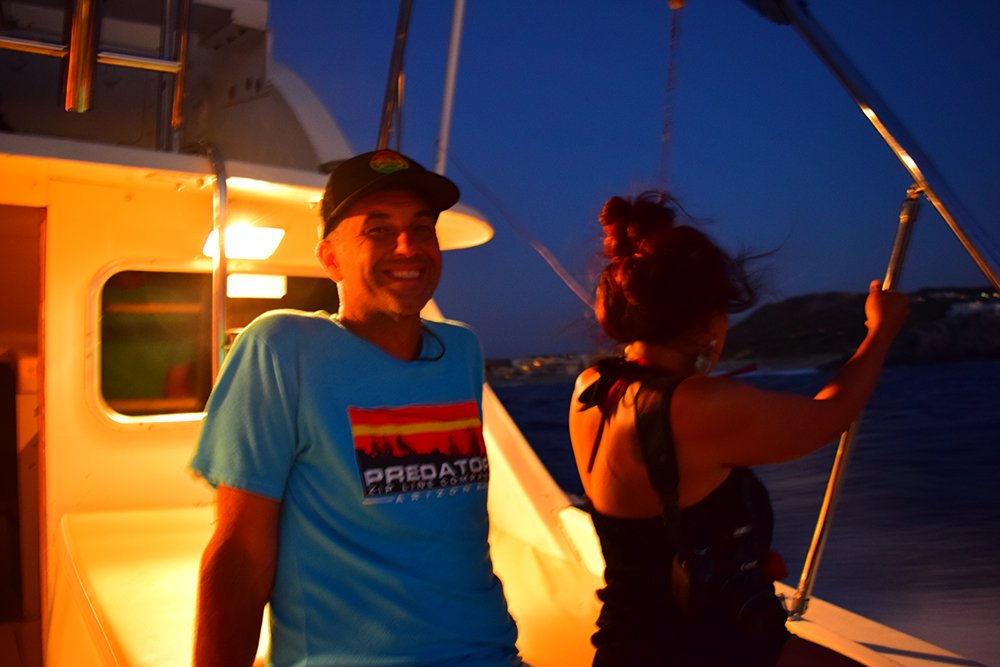 What Happens Once on the Boat

Once on board and acquainted with your crew (we had a pilot and a deckhand) you’ll depart the dock and join the flotilla making of boats making its way out into the open waters. 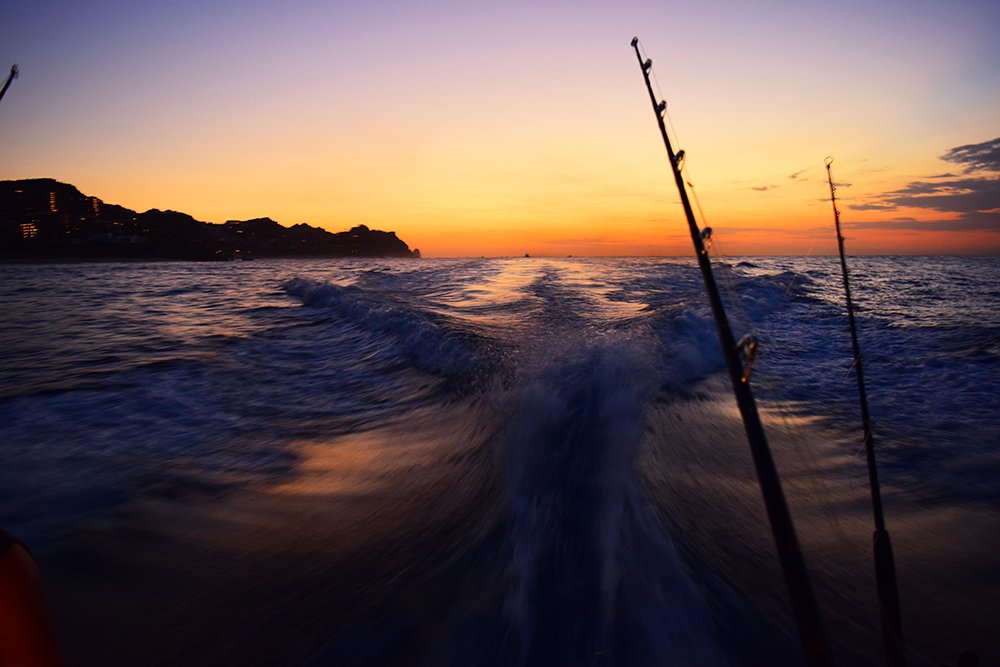 On the way out of the harbor, you may stop for live bait, like we did, and then continue on your way out into fishing zones offshore. You’ll get to experience the beauty of the sunrise on the water, as you power out to the fishing sites. 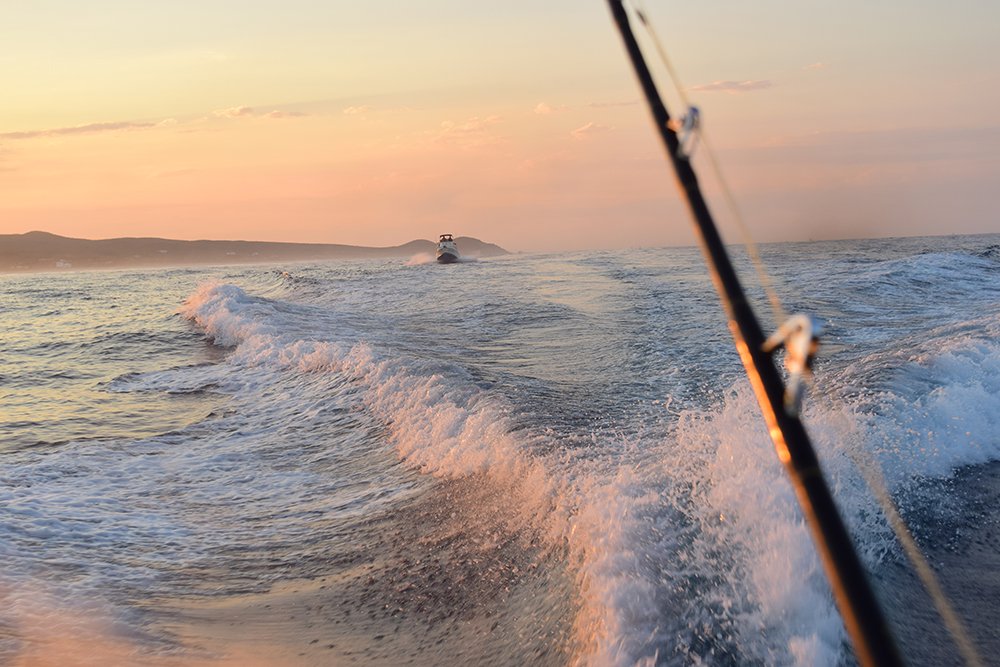 The waters here are loaded with good-eating fish. We wanted mahi mahi, known here as dolphin fish. But there are plenty of game fish in the water, including wahoo, tuna, snapper and area’s famed sailfish.

There are limits on the number of fish you can catch, and it is very popular to catch and release billfish. Someone in our group caught a marlin and we released it back into the waters to swim another day. 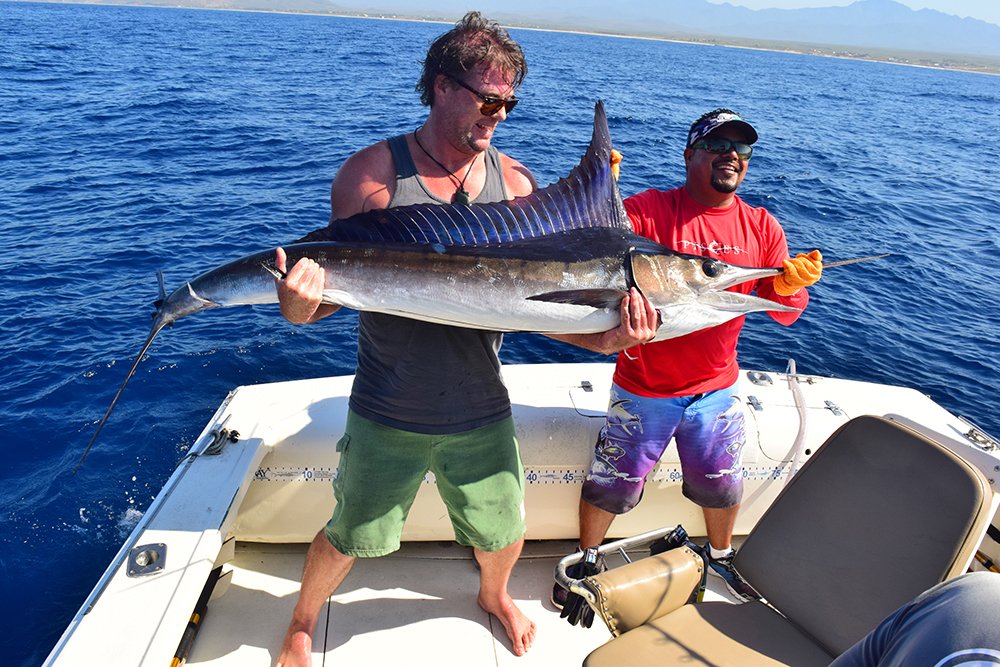 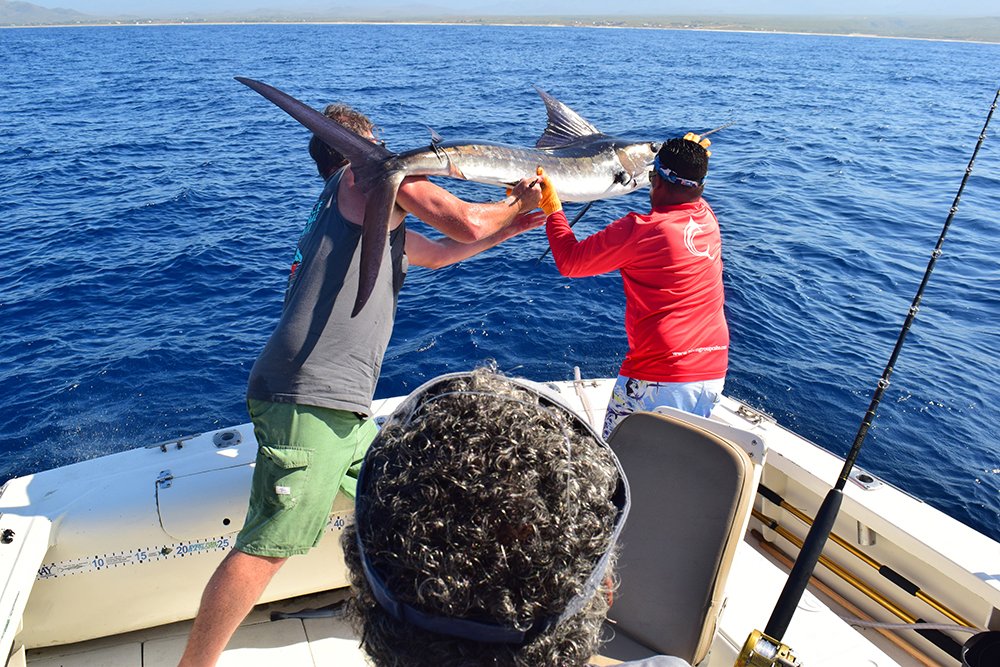 Where You Go to Catch Fish

We wanted mahi mahi, so we stuck fairly close to the shore along the Pacific side of the peninsula. We caught a total of five mahi mahi, each of which weighed about 12 lbs. We did go out a bit further off shore once we had our fish, and that was where we hooked our marlin - smallish at around 60 lbs. 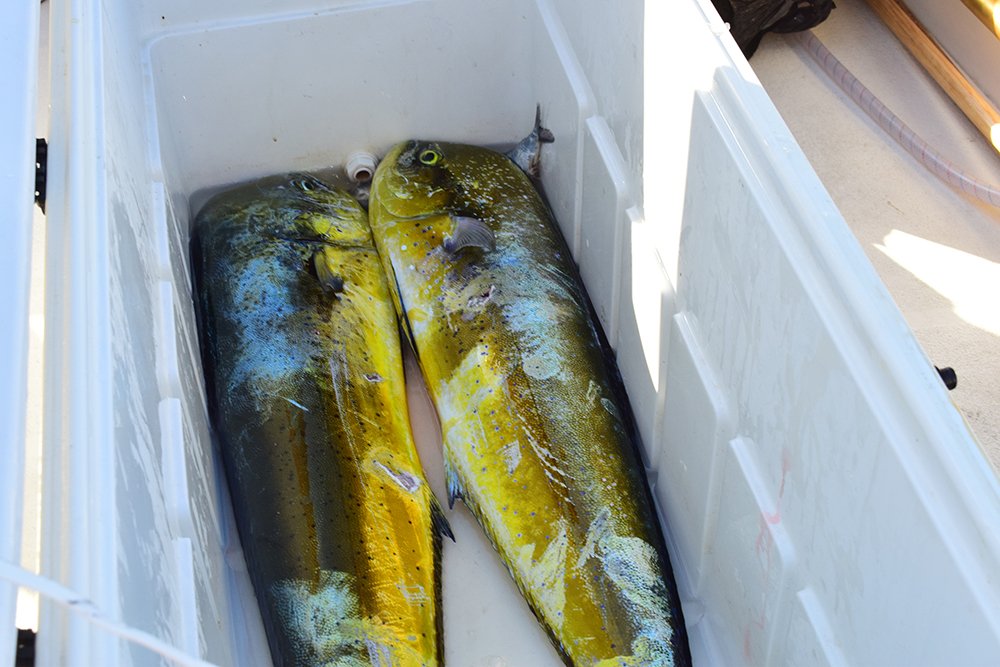 To catch the big game fish, you’ll need to go further out to sea. We were told that you will travel up to 20 miles out to hunt for the big ones. The winning anglers in the Bisbee tournament that wrapped up when we were there caught a 583 lb. blue marlin, taking over $206,000 in prize money.

Hooking a fish is a rush. There’s a current of excitement in the boat as the deck hands set you up to haul in your catch. Then, it’s just a matter of strength and patience. The fish we brought in were only around 12 – 15 lbs. and they were quite strong. The entire process of reeling them in took about 20 minutes once the fish was on the line. 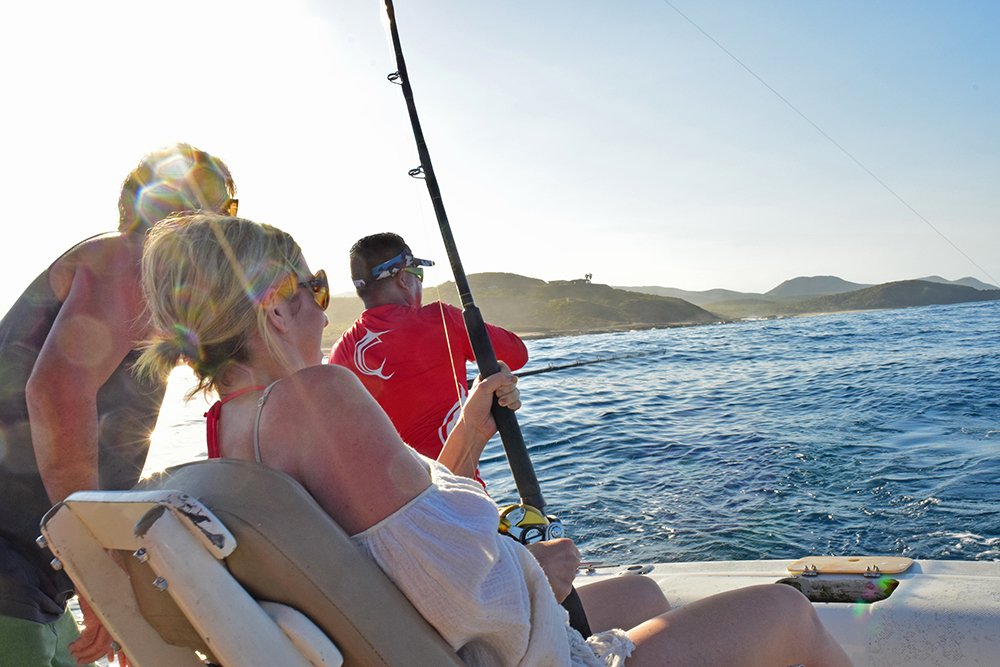 You only keep fish that you plan to eat or take home, otherwise all fish should be released.

How Do You Take Fish Home

The fishing charter company will likely fillet your fish for you and/or pack them up in ice if you wish. If you want them to pack the fish and get them ready for transport home, they will take a day to prep. We had ours filleted and separated into five bags, which we brought home and froze ourselves.

Raising of the Flags and Other Fun Facts

You will notice flags on boats returning to the harbor that show which fish were caught and the quantity. You will notice that we have a marlin flag, with a “T” flag below it, signifying for “tag and release.” 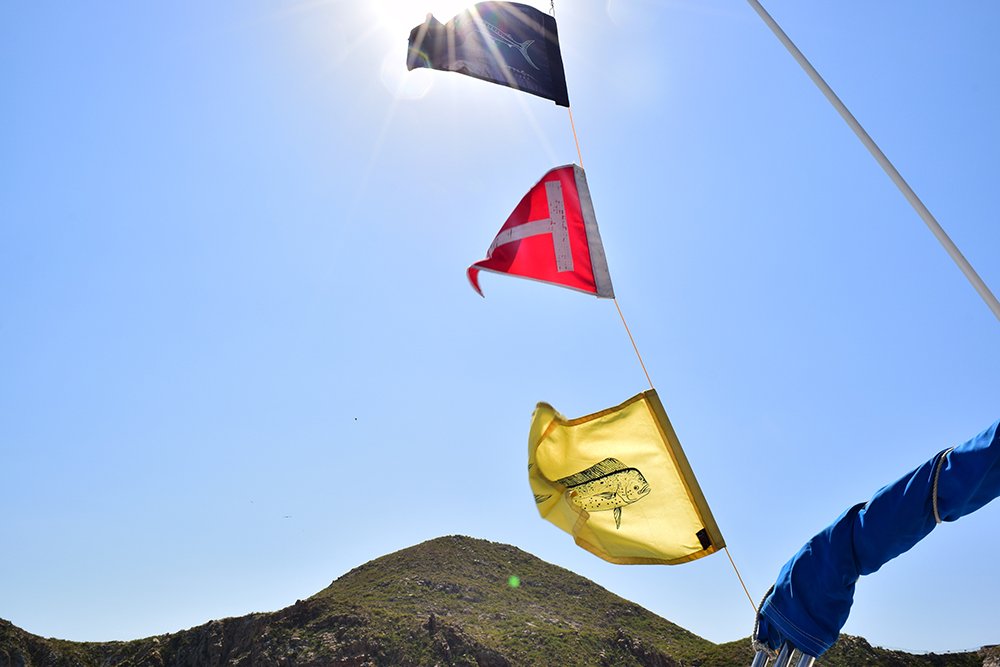 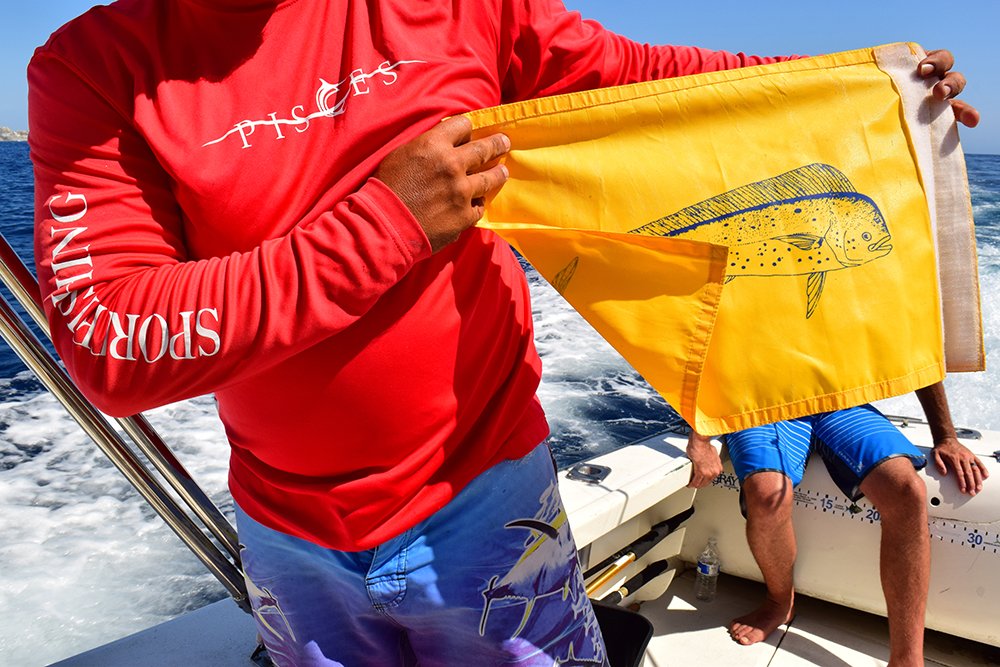 Also, because the harbor is so busy, and there is so much fish coming in and out of the wharf, there are some colorful characters who make the best of out of a fishy situation. Namely, there is a seal who likes to jump onto the rear of boats and take any bait or other fishy snacks available, and, once of the dock, there are a few pushy pelicans who will boldly hop onto your boat and steal bait fish! 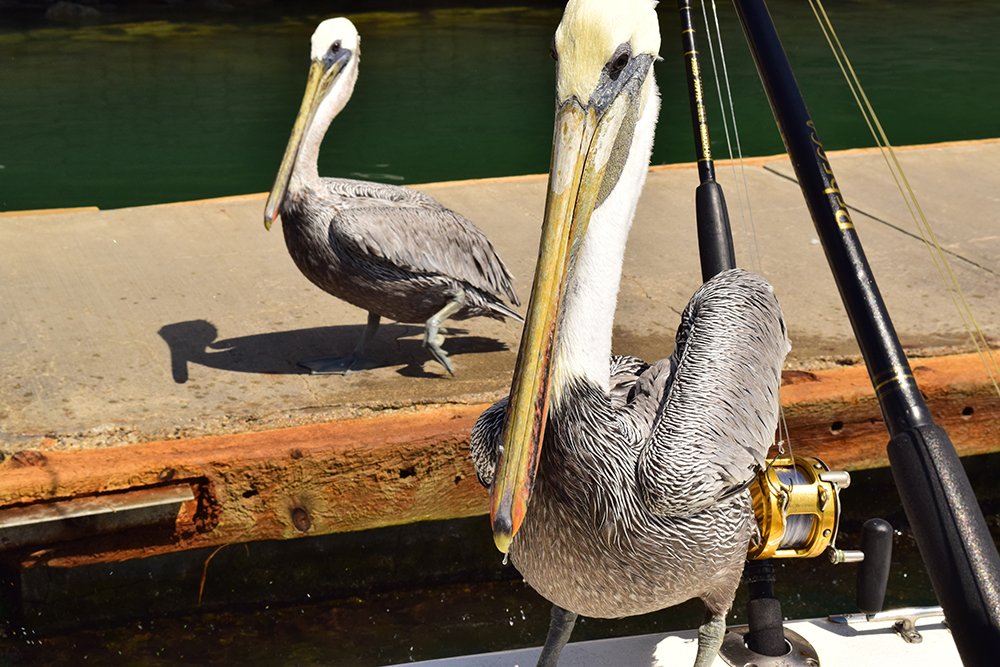 You’ll need to check with your airline about the rules for bringing home fish. However, the general guideline is that it will need to be frozen and packed in a leak-free cooler, and then checked as baggage. I was able to pack my portion into a watertight, soft cooler and then seal it in my checked bag.

What Else to Bring

If you tend to get seasick, beware, the water can be rough. Bring the usual things you need for the beach, like sunblock and towels, and any particular snack that your group prefers. You will have plenty of water, beer and a basic lunch pack provided.

Get out there and catch dinner when you’re down in Cabo – it will probably be the most delicious fish you ever eat. And don't forget to pick the perfect Exotic Estates Cabo Villa for your group!

Take a Tour with Exotic Estates

Preferred Affiliate
Save up to 5% on your next trip from the US Mainland to Hawaii!

Thank You for subscribing our newsletter.